It’s that time of year: it’s been nice and warm and dry and sunny for weeks now, and the result of continuously exposing lots of bare skin and being slightly sweaty means I am completely covered by mosquito bites. For example, this morning, when I went for a run – yes, see how I just casually worked into the conversation that I’m a jogger, next thing I’ll tell you that I vape and am a vegetarian and do CrossFit and love IPA, #hipster (only half of that is true) – I felt like I had to do  more effort beating of the mosquitoes than actually doing the running. Though that may say more about my running skills.

In any case, like I do every single year, I wondered: why are there even mosquitoes? They are annoying, they spread disease, they bite, and they are annoying. No-one likes mosquitoes, except for maybe those few crazy mosquito-scientists. And I also wondered: Why me? There are so many other human specimens around that have perfectly tasty blood (I’m just guessing here, obviously I don’t actually know for sure), why do mosquitoes seem to favor mine? 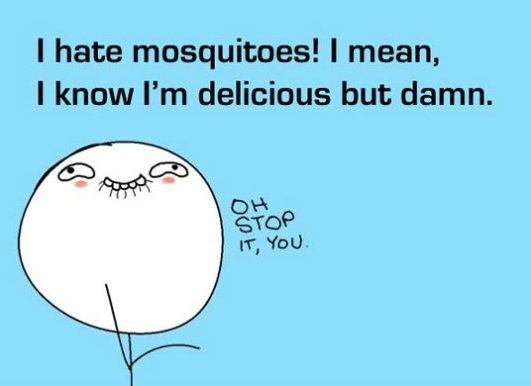 Okay, first things first, as with everything out there, including the annoying and gross, mosquitoes have their place in the ecosystem. If they were to be completely wiped out, all the animals that feed on mosquitoes and mosquito larvae would suffer. This includes other insects, small fish, and amphibians. Move a bit more up the food change (game fish, raptorial birds, etc.) will also decline in numbers. So not good. Ecology is an intertwined network that we better not touch.

Wait, I just realized this means that we’re on the bottom of this food chain?
Damn, my human pride cannot handle this!

Anyway, in addition, mosquito control programs so far have been very destructive. Draining swamps, using pesticides and DDT, etc. is just not really good for the environment. In other words, we’re stuck with each other. *Sigh*

If we have to bear the itching, which is actually an allergic reaction to the anticoagulants in mosquito saliva, maybe we can find a way to avoid getting bitten. Well, apart from spraying really smelly annoying sticky insect spray. I have days when I smell like sunscreen, sweat and insect repellant and I really apologize to everyone for that.

Maybe we can find out why some people get bitten more than others? There has been quite some research on that topic, and as it turns out, it depends on the type of mosquito (there are hundreds of mosquito species), genetics, blood type, sweatiness, and eating habits. So, unfortunately, there is no straightforward answer…

It does seem that mosquitoes are slightly more attracted to:

Unfortunately, this all depends on the type of mosquito. Moreover, there seems to be no evidence that there is something you can eat to avoid being bitten. I mean, they are bloodsucking but not exactly vampires (you can stop eating all that garlic, Karen, seriously, you reek).
So it seems that we have to stick to spraying really smelly annoying sticky insect spray.

I’ll leave you with a final fun fact: the oldest fossilized mosquitoes are 100 million years old! Quite recently, a 46-million-year-old blood-engorged mosquito was found in Montana, which actually led to a publication that directly mentions the 1993 film Jurassic Park. #OMG (I’m easily pleased).