If you are confused by the title, that’s okay. Usually, when we read something about cancer, it is about something biology-related, for example about specific mutations or the environmental conditions that increase cancer risk. A lot of research is happening with regards to the biology and biochemistry of cancer: which tumour suppressor genes are mutated in certain cancers, what are the effects cancer has on someone’s health, what drugs can we use to treat a cancer, … ? But, perhaps surprisingly, studying the physics of cancer also has its merit. Why, it’s a whole field in itself!

So I’d like to talk a little bit about this topic, the physics of cancer, and in this first part, I will focus on how physical forces can change the behaviour of cells (and how this might be involved with disease).

Cells not only sense their biological environment, they also feel their physical environment. They sense the stiffness of the cells and protein structures around them, they sense how other cells are pushing and pulling on them, and then they react to it. And these mechanisms could actually be quite important for the development and progression of cancer.

Recent research showed that the cells surrounding a tumour are under mechanical stress because of the growth of the tumour. As a tumour grows, it pushes on its environment. So the – initially healthy – cells in its direct surroundings, feel a pressure. In this specific study, they showed that this pressure caused the cells to start a mechanical response pathway leading to the upregulation of a protein β-catenin. This protein is involved in activating certain pathways involved in cell proliferation.

Which is exactly what its upregulation leads to in cancer. In the case of colorectal cancer (which I am particularly interested in), a mutation of Apc (adenomatous polyposis coli, in case you were wondering) also leads to an accumulation of β-catenin amongst other things. The APC protein has been linked to many functions, but the best known is its involvement in forming a complex that binds to β-catenin and tagging it for destruction. That way the proteins involved in protein recycling know that the β-catenin proteins can be cut up. But when APC is mutated, β-catenin gets tagged and starts piling up and doing some of its jobs a little bit too well, including inducing proliferation pathways.

So back to the study, if healthy cells are experiencing a constant pressure (due to a big bad tumour growing into their space, or – as they tested in the study – artificially caused pressure), they start acting more “cancer-like”. This suggests that mechanical activation of a tumorigenic pathway, in this case, the β-catenin pathway, is a potential method for transforming cells.
This is just one example of how physics and cancer are potentially related. As a side note, I myself am also interested in how cells respond the mechanical stresses, which prompted me to do an experiment where I placed weights on top of cells. 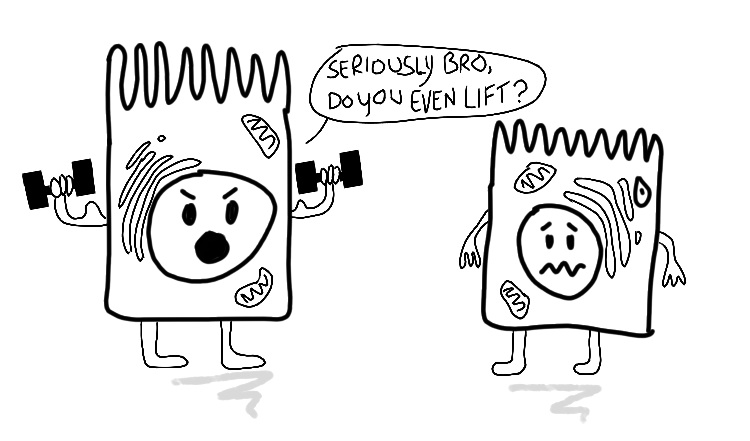 This subject was the topic of my first FameLab performance, which ended in a little song (to the tune of “Friday I’m in Love” by the Cure). It’s sung from the perspective of a cell that is stuck next to a growing tumour:

Hello there, I am a cell.
Feeling healthy, fit and well.
Life is good, yes, life is swell.
But my neighbour’s got it worse.

Something about him does not belong.
The way he pushes is just wrong.
They say in him the force is strong,
they say he’s got the force.

He takes up so much space.
And is always getting up in my face.
It’s putting me in a stressful space.

Oh, have a mentioned that I like Star Wars?