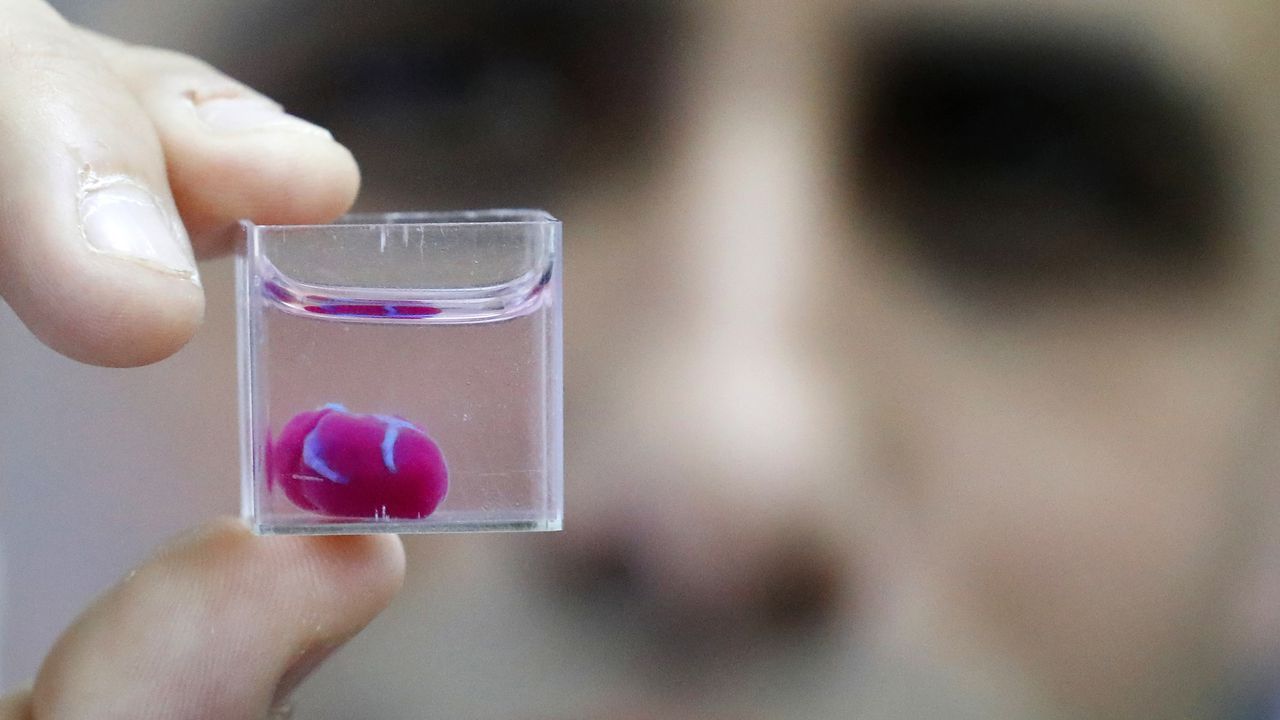 It goes without saying that 3D printing is cool*. The ability to think up any three dimensional structure, design it in a 3D design software and have it materialize blows my mind. Granted, I’m making it sound like it’s a very easy and fast process and I know that’s often not the case, but I also know that for a lot of engineering and physics laboratories, the ability to relatively quickly print a model or prototype for anything is extremely useful. In addition, it’s an amazing educational resource. You can print model organs, molecular structures, planets, … and have something physical to show or throw around during a science demo.

Just to name a few reasons why 3D printing is cool.

What is possible even cooler is the potential of printing tissues and organs. And now, for the first time according to a group of researchers in Tel Aviv, it has happened: a complete 3D heart was printed.

They started with some cells isolated from a sheet of fatty tissue from a human patient. These cells were reprogrammed to what’s called pluripotent stem cells. Pluripotent stem cells have the potential to give rise to many different cell types , depending on the biochemical cues they get – for example by changing the formulation of the culture media, which contains nutrients, hormones and other components to “feed” the cells.

In this case, the cells were driven towards being heart muscle cells and blood vessel cells. By mixing these cells with a personalized hydrogel, consisting of collagen (remember, from the reindeer eyes?) and glycoproteins (proteins have a sugar molecule connected to it), the researchers created a “bioink”, a material that could be used to print cardiac tissue in the same way a 3D printer prints 3D structures using a plastic “ink”.

While the 3D printed heart – currently around the size of a rabbit’s heart – cannot beat yet, the possibility to be able to print custom organs, starting from a patient’s own cells and therefore eliminating an immune response, is of major importance for medical applications. To enable heart function, the heart cells would have to be taught how to contract in an organized manner, and create a beating heart.

Beating has already been achieved in heart organoids. Organoids are little mini-organs grown in a petri dish, that mimic the organization and function of an organ in a living organism. The difference between 3D printed organs and organoids, is that organoids are allowed to form their own structure and cell types, driven by the media cocktail they are given, while 3D printing positions already differentiated cells in a 3D scaffold. Heart organoids, starting from one or a few reprogrammed cells, grow into structured groups of cells that spontaneously start beating.

These organoids, however, don’t really mimic the structure of the heart unless you “force” structure by growing these mini-hearts in a mold, basically geometrically confining the cells to form a predefined structure.

A model of a pumping heart was developed last year, creating an in vitro biomimetic system that could help with drug discovery and studying cardiac diseases. While it doesn’t look as much as a heart as the 3D printed one developed by the Israeli research group, it’s still pretty amazing to watch this little blob of tissue beating under electrical stimulation:

In any case, I hope to see a combined version of all of the above: a 3D printed, functional heart. Nevertheless, this first (though debatable if they actually were the first) 3D printed heart is pretty awesome and has a lot of potential applications in medicine and clinical research. Not to mention that it looks pretty cool:

*Sudden realization that most (if not all) of this blog is me saying “Hey, did you hear about this science thing, it’s really cool!!”