If you are in any way familiar with the world of electronics, electrical engineering or anything with the catchword “nano” in it (except perhaps the ipod nano, though actually it is a prime example of my Moore’s law point later on), you’ve heard of Feynman’s famous words:

“There is plenty of room at the bottom”

If you’re not, here’s the jest of it:
In December 1959, Richard P. Feynman presented a talk to the American Physical Society in Pasadena,  California, commenting on the wondrous world of miniaturisation. He explains that even though they progressed so far by that time, there is so much more room to improve. Things can still be made so much smaller.

It is a staggeringly small world that is below. In the year 2000, when they look back at this age, they will wonder why it was not until the year 1960 that anybody began seriously to move in this direction. Why cannot we write the entire 24 volumes of the Encyclopedia Brittanica on the head of a pin?

When I was doing a course in nanotechnology, Feynman was often quoted in one breath together with Moore. Moore’s law, which dates back to 1965, postulates that every two years, the amount of transistors (an semiconductor element that is very important in computing) that can fit on an integrated circuit will double every two years. This prediction has been surprisingly well met;  most direct consequence is that the size of computers and electronic components keep getting smaller (remember, ipod nano). But there is a limit, transistors can only be so small; single atom transistors are not impossible (and currently in research stage), but after that, we cannot go any smaller.

Has research reached it’s lower limit? As I’ve stated, we are able to manipulate single atoms, we can build single atom electronics, and in the field of optics we are pretty much at the lower limit as well with superresolution microscopy and single molecule imaging and with electron microscopy to unravel the world at an atomic scale.
What is left to improve?*

There are different ways to study something. For example, let’s take cancer cells. We can look at them, through a microscope, and if we want at very high resolution, to unravel the differences between cancerous cells and their healthy counterpart. We can feel them, well not us directly but through techniques such as atomic force microscopy, which also can provide very high resolution, to investigate the effects of different mutations. Additionally we can listen. Well, not us directly, but by using ultrasound. Now there’s a field with plenty of room on the bottom.

Conventional ultrasound, for example the type that is used to look at babies in wombs, uses frequencies from over 20 kHz (which is the maximum frequency of sound that is audible to us, hence ultrasound) to a few MHz and provides a resolution usually no less than 100 µm. Compared to optics, this is nothing. However, ultrasound has quite some advantages over optics. Higher penetration depth, no lasers (pew pew pew), possibility of quantifying a lot of useful things like mechanical properties, just to name a few. And it has plenty of room at the bottom, we are now where near the limit yet!

We can increase the frequency up to 47 MHz (which I use routinely), or 150 MHz or even up to 1000 MHz. It’s called high-frequency ultrasound. Or super-high ultrasound. Things get really interesting then. You can image cells. You can do superresolution imaging.

There are really exciting things going on in the field of ultrasonics, and I’m not just saying that because I’m looking more into it for my own research at the moment. Researchers were recently able to image the rat brain at a previously unseen resolution (see the pretty picture below). Other groups are extracting information from single cells using ultrasound that can’t be obtained using optical techniques. And that is just mentioning a few of the many recent advances.

In any case, my point is that we might be plateauing with regards to improving resolution on optics or miniaturising our electronics, but there is still plenty of room at the bottom to listen ! 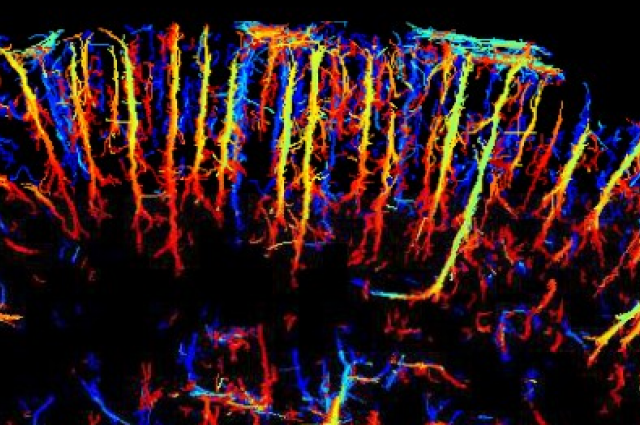