Working in a research environment definitely changes your perspective on the meaning of “cheap” and “expensive”. If paying £194 to go to a festival seems like a lot of money, then consider that you need to pay at least half more to buy an antibody. “Cheap” purchases include most things under, say, £200. And I don’t even want to think about how much money gets spent on consumables like pipets and petridishes. If you want to really do something, you need to buy equipment like microscopes or PCR meters and you can probably buy a car with the same amount of money. Or a jet. Needless to say then, that conducting scientific research is quite an expensive endeavour and it’s no bit surprise that a lot of time goes into applying for grants.
Does it really have to be this expensive though?

The simple answer is: probably.

The fun answer, however, is NO!

I’ll give you an example (and let’s pretend to ignore the fact that I’m too lazy to find another example): easy-to-make, affordable, microscopy lenses. It is quite similar to the water drop hack, which is even cheaper than the method I am going to purpose, but not quite as versatile. I am talking about a lens made out of PDMS.
Bear with me, I am going to explain.
The idea was published last year. It makes use of polydimethylsiloxane (also known as PDMS), which is a elastomer used commonly for making microfluidic devices. The elastomer is made by mixing to reagents together and exposed to heat to allow it to polymerise and form a stable, flexible, clear, rubbery bit of stuff.

An example of a microfluidic device made of PDMS (as a result of a quick google search).

As it is clear and has a high refractive index, making a droplet-shaped bit of this PDMS might very well be used as a lens in combination with a smartphone. And it is cheap, a 1.1 kg bottle of this PDMS might cost a little bit (around £100, but I have already that this is cheap in scientific consumables terms), but you can make so many lenses out of this, it results in about £0,05 per lens. Cheap huh.
So yesterday evening, we spent some time trying to make some of these lenses, which worked quite well. It is very easy to make (we are going to try this as an outreach workshop) and it is also absolutely cool. From just a few hours of messing around – and it is quite a sticky substance to work with – with cover slips, the PDMS, a syringe and a lamp to provide the heat, we made quite some lenses and took quite some pictures.
Wait, I’ll give you another example (it isn’t really though): so using these lenses, you can make a simple (and cheap!) optical trap. An optical trap uses a laser to trap, for example, a bead*. This can be used to measure the viscosity of fluids, measure forces involved in cellular processes (protein folding, motor proteins, adhesion, cytosol viscosity, motility forces, …) or to play a game of tetris. It’s quite a cool technique, and now you can save on costs by making your own lens! (I’m sure the paper will be accessible soon.)
Anyway, this is just to say that research doesn’t always have to be expensive. And obviously it was already fun, but it can be even more fun (who knew)? 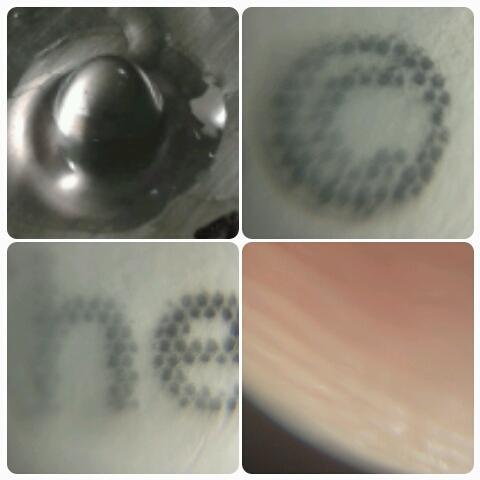 The result of mucking around. Top left: a PDMS drip lens. Top right and bottom left: pixels from some text on a paper. Bottom right: some of my finger print lines. 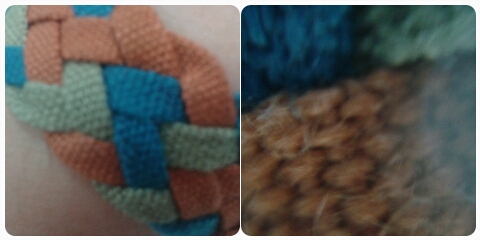 Another example: the fabric of my watch. Left is taken in macro mode without the lens (even a bit out of focus), right is with the PDMS lens.

We live in exciting times. Nostalgia-drenched movies are out now or being released soon. Our childhood hero is returning in the form of theatre. Certain fantasy characters might have actually existed**. Advances that we could only dream of (or write Sci-Fi novels about) seem within reach. And new awesome ways are being developed to make science cheap and accessible for anyone.

Finally, I’ll end with a teaser:

We are currently setting up an outreach project bringing these things together: 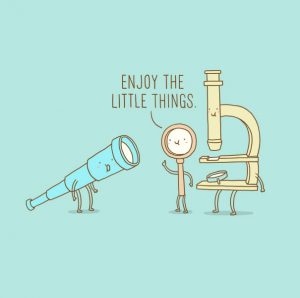 But I enjoy the far away things too! (source)

And it’s already been so much fun! Learn more on twitter or wait until I dedicate a post on the subject (sometime I will!)

*Yes, this is in no way an adequate explanation of optical trapping. I could say it uses “magic” to trap beads, though I’m sure you won’t believe me.
** Yes, I just rushed over multiple topics that I not-so-secretly wanted to mention in one way or another.

2 thoughts on “Cheap is good, almost free is better!”