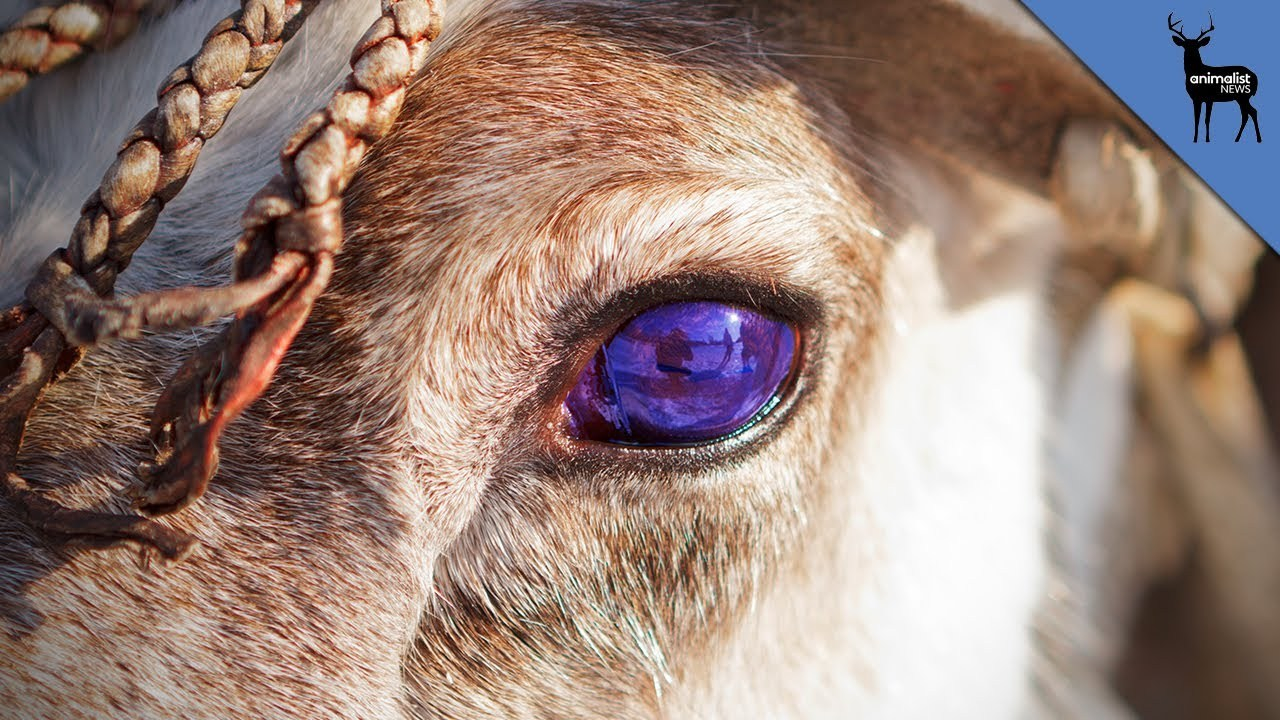 Occasionally, a colleague passes by my desk and says something along the lines of “Hey, did you know that *insert fun – usually science-related – fact here*?”

The other day, this exact thing happened:

“Hey, did you know that reindeer’s eyes turn blue in the winter?”

The question was prompted by the magnificent drawing of an octomoose (name pending) on the white board in our office. How the octomoose came about, is not that interesting a story, but I would want to share with you that we held a poll to determine the name of the 8-tentacled creature. My vote was for moctopus. I did not win (6 vs 3 votes).


So now that winter has come to an end, let’s talk about those weird reindeer eyes.

Discerningly, the first suggestions google search gave me when I typed in “reindeer eyes” was “reindeer eyes recipes”, which is just creepy; though actually clicking through reassured me that it was about chocolates and cookies (phew).

Jackpot? Nope. The photo was photoshopped (quite obviously). Sigh. This is turning out to be a lesson in fact-checking.

However, I was not chasing a myth. It’s still true that reindeer’s eyes change color from gold in the summer to blue in the winter. Proof of this is in a scientific paper (hurray for backtracking to the source) which features some very creepy photos of reindeer eyeballs:

The explanation as to why this happens seems to lie in the reflective layer that sits behind the retina: the Tapetum lucidum. A lot of mammals have this layer; you might have noticed it when shining a light in your cat’s eyes (and survived to tell the tale). This extra layer helps animals see when it’s all twilight-y. It reflects light that passes through the retina, causing the light to pass through the retina twice, giving the light-detecting cells of the retina a second chance to detect any photos. When you see that yellow glow in your cat’s eyes, it’s the light reflecting right back at you off their Tapetum lucidum.

The next bit of eye knowledge you need to understand the changing reindeer eye color is the fact that pupils widen and shrink depending on how much light is available. Dilated pupils allow more light to enter the eye, and hence more photons can be detected by the light-sensing cells in the retina.

In the arctic winter – basically 3 months of darkness – the reindeer’s pupils are continuously dilated. The constant effort to keep the irises open constricts the small vessels that usually drain fluid out of the eyes. This, in turn, causes a pressure buildup within the eye, which compresses the Tapetum lucidum.

The Tapetum lucidum is mostly made up of a protein called collagen. This fibrous protein is a hydrogel, an ordered mesh of fibers that absorb and retain fluid. However, when this mesh is compressed, the fluid is squeezed out (like when you squeeze a sponge) and the orderly rows of collagen fibers become more tightly packed. The type of light that is reflected by the Tapetum depends on the spacing between these fibers. When they are “normally” spaced, like in the summer, longer wavelength light (yellow) is reflected, giving the Tapetum a golden color. When tighter packed, blue wavelengths (which are shorter) are reflected, giving the reindeer blue eyes.

In short, in the months of darkness, reindeer’s pupils are permanently dilated, leading to the swollen eye, leading to compression of the collagen fibers, changing the color that is reflected by the Tapetum.

Research is still ongoing because even though the mechanism behind eye-color-change has been explained, the effect on eye function is still unclear. Perhaps this change in eye color changes the sensitivity of the eyes. And why do other arctic animals, who also live through months of perpetual darkness, not have this cool change in eye color?

However, one thing is for sure, Rudolph’s red nose cannot be explained by science. Yet.

2 Replies to “Behind blue eyes”