As you may well know, because you have read it here or heard it elsewhere, this year is the 100 year anniversary of D’Arcy Thompson’s On Growth and Form. The book is over 1000 pages long, and while extremely interesting, it can be quite a task to get through. Therefore, I figured I’d share some of the thoughts I had while reading – and to be honest, this was sometimes diagonally – through this masterwork.

To place this and future posts within context, I will first focus on how its main premise (physical forces as the driver of morphology) fits into the context of the time where the general sentiment was:

No other explanation of living forms is allowed than heredity, and any which is founded on another basis much be rejected… (1)

But that is not to say that no one in the scientific community was open to the idea that physics had some part to play:

To think that heredity will build organic beings without mechanical means is a piece of unscientific mysticism. (1)

It seems D’Arcy Thompson’s book was the first major publication on this idea, and his book is an inspiration for biomathematicians and biophysicists today. Or at least it is thought-provoking: throughout the book he underlines through several – 1000 pages worth of –  analogous observations from the material (non-living) and biological (living) world his theory, that the way biological systems grow, and the shape and size they eventually take, is driven by physical principles:

Cell and tissue, shell and bone, leaf and flower, are so many portions of matter, and it is in obedience to the laws of physics that their particles have been moved, moulded and conformed. … Their problems of form are in the first instance mathematical problems, their problems of growth are essentially physical problems. (2)

It is important to point out that he never claimed that physics is the only driving force of the shape and size of living things, just that it is one of the drivers, and that heredity is extremely important in understanding the processes of biology in its own right. But if outlining the physics of growth and form takes over a thousand pages, we should almost be thankful that heredity was taken out of the picture:

We rule “heredity” or any such concept out of our present account, however true, however important, however indispensable in another setting of the story, such a concept may be. (3)

Ruling it out of the picture doesn’t stop D’Arcy from occasionally musing on the limitations of heredity:

That things not only alter but improve is an article of faith, and the boldest of evolutionary conceptions. How far it be true were very hard to say; but I for one imagine that a pterodactyl flew no less well than does an albatross, and that Old Red Sandstone fishes swam as well and easily as the fishes of our own seas. (4)

This goes to show that while D’Arcy did not consider evolutionary theory in his story, it was not something he hadn’t thought about. He regularly quotes Darwin (I’m working through The Origin of Species myself at the moment… at least D’Arcy’s book had some pictures!) and as a professor in zoology, it stands to reason that he was knowledgeable on the subject.  Throughout his career, he published around 300 articles and books, and some day I’ll go through all of them to show he has written more on heredity.

To conclude, while On Growth and Form outlines an alternative theory to explain the morphology of biological systems, it is in no way trying to replace or contradict the theory of evolution or any idea of genetics-driven development. I’ll wrap up with one of D’Arcy’s final thoughts:

And though I have tried throughout this book to lay the emphasis on the direct action of causes other than heredity, in short to circumscribe the employment of the latter as a working hypothesis in morphology, there can still be no question whatsoever that heredity is a vastly important as well as a mysterious thing; it is one of the great factors in biology, however we may attempt to figure to ourselves, or howsoever we may fail even to imagine, its underlying physical explanation.  (5)

Well, that’s all folks. More on growing and forming next time! Have I mentioned that this book is over a thousand pages long? 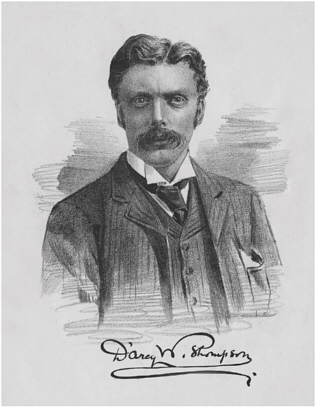 D’Arcy in his twenties (University of Dundee Archive Services)

One thought on “Physics, but not vs evolution (100 years, part III)”