Ever since I have been enquiring into the works of Nature I have always loved and admired the Simplicity of her Ways. (1)

In his book (yes, it’s about that again), D’Arcy supports his ideas through examples, through observations on biological systems that he can either explain through mathematical equations or directly compare to purely physical phenomena such as bubble formation. You might think that these are grave simplifications.

However, even in biology, which some people might call a “complex science”, simplifications are often used. Using cell culture rather than tissue. Isolating a single player in a pathway to see what its effect is. And quite often, a simplification holds true within the limits that have been set up to define it.

As was pointed out to me recently, the definition of “complex” is that something is “composed of many interconnected parts”. Meaning that this is not necessarily the antonym to “simple”. But “complex” is often seen to mean the same thing as “difficult”, even if that’s not necessarily the definition. In any case, it is definitely not so that physics is a “simple science”:

But even the ordinary laws of the physical forces are by no means simple and plain. (2)

It makes sense to break down a complex system into its individual components and analyse these, perhaps more simple concepts, separately. There is great value in simplifying things. First of all, there is a certain beauty in simplicity:

Very great and wonderful things are done by means of a mechanism (whether natural or artificial) of extreme simplicity. A pool of water, by virtue of its surface, is an admirable mechanism for the making of waves; with a lump of ice in it, it becomes an efficient and self-contained mechanism for the making of currents. Music itself is made of simple things – a reed, a pipe, a string. The great cosmic mechanisms are stupendous in their simplicity; and, in point of fact, every great or little aggregate of heterogeneous matter involves, ipso facto, the essentials of a mechanism. (3)

When reading this paragraph, two things jumped out at me. Two weeks ago, I was at the annual meeting of the British Society for Cell Biology (joint with other associations) and heard an interesting talk by Manuel Théry. Part of his story relied on putting boundaries on a system. Without boundaries, whatever we would like to study just gets too complicated, and we are unable to understand what is happening. For example, when explaining how waves originate, it is much easier to use a system where water is confined in a box. We can then directly observe the wave patterns that start to occur and understand their interactions.

And then this: “Music itself is made of simple things – a reed, a pipe, a string. The great cosmic mechanisms are stupendous in their simplicity.” D’Arcy sure knew his way around words.

Simplifying also heavily increases our understanding of the principles of life, the universe and everything. When you think about it, it is used so often, you hardly even notice that certain simplifications have been made. D’Arcy points this out as well:

The stock-in-trade of mathematical physics, in all the subjects with which that science deals, is for the most part made up of simple, or simplified, cases of phenomena which in their actual and concrete manifestations are usual too complex for mathematical analysis; hence, even in physics, the full mechanical explanation is seldom if ever more than the “cadre idéal” towards which our never-finished picture extends. (4)

When considering biological systems, he states the following:

The fact that the germ-cell develops into a very complex structure is no absolute proof that the cell itself is structurally a very complicated mechanism: nor yet does it prove, though this is somewhat less obvious, that the forces at work or latent within it are especially numerous and complex. If we blow into a bowl of soapsuds and raised a great mass of many-hued and variously shaped bubbles, if we explode a rocket and watch the regular and beautiful configurations of its falling streamers, if we consider the wonders of a limestone cavern which a filtering stream has filled with stalactites, we soon perceive that in all these cases we have begun with an initial system of very slight complexity, whose structure in no way foreshadowed the result, and whose comparatively simple intrinsic forces only play their part by complex interaction with the equally simple forces of the surrounding medium. (5)

For many biological and non-biological systems, the initial conditions might not seem complex. It is by interactions between other – perhaps on their own relatively simple – environmental conditions, other simple systems, that it grows out to be complex. Obviously, as in the definition. But a complex system is more difficult to understand conceptually, more difficult to model. And that brings us the value of simplification, looking at smaller, simpler systems that more closely resemble the “cadre idéal”, allow us to pick apart the different players in a larger system. If we understand their individual behaviour, perhaps this can shed light on the collective behaviour.

As we analyse a thing into its parts or into its properties, we tend to magnify these, to exaggerate their apparent independence, and to hide from ourselves (at least for a time) the essential integrity and individuality of the composite whole. We divide the body into its organs, the skeleton into its bones, as in very much the same fashion we make a subjective analysis of the mind, according to the teachings of psychology, into component factors: but we know very well that the judgment and knowledge, courage or gentleness, love or fear, have no separate existence, but are somehow mere manifestations, or imaginary coefficients, of a most complex integral. (6)

As far as D’Arcy goes in his book, his simplifications hold true:

And so far as we have gone, and so far as we can discern, we see no sign of the guiding principles failing us, or of the simple laws ceasing to hold good. (7)

Of course, this does not automatically lead to complete understanding. We only get that tiny bit closer to seeing the bigger – and smaller – picture:

We learn and learn, but will never know all, about the smallest, humblest, thing. (8)

Because we must never forget that adding together those simplifications does not automatically lead to the answer to the complete problem (and I find this oddly poetic):

The biologist, as well as the philosopher, learns to recognise that the whole is not merely the sum of its parts. It is this, and much more than this. (9)

To end, D’Arcy also makes note of things beyond his comprehension:

It may be that all the laws of energy, and all the properties of matter, and all the chemistry of all the colloids are as powerless to explain the body as they are impotent to comprehend the soul. For my part, I think it is not so. (10) 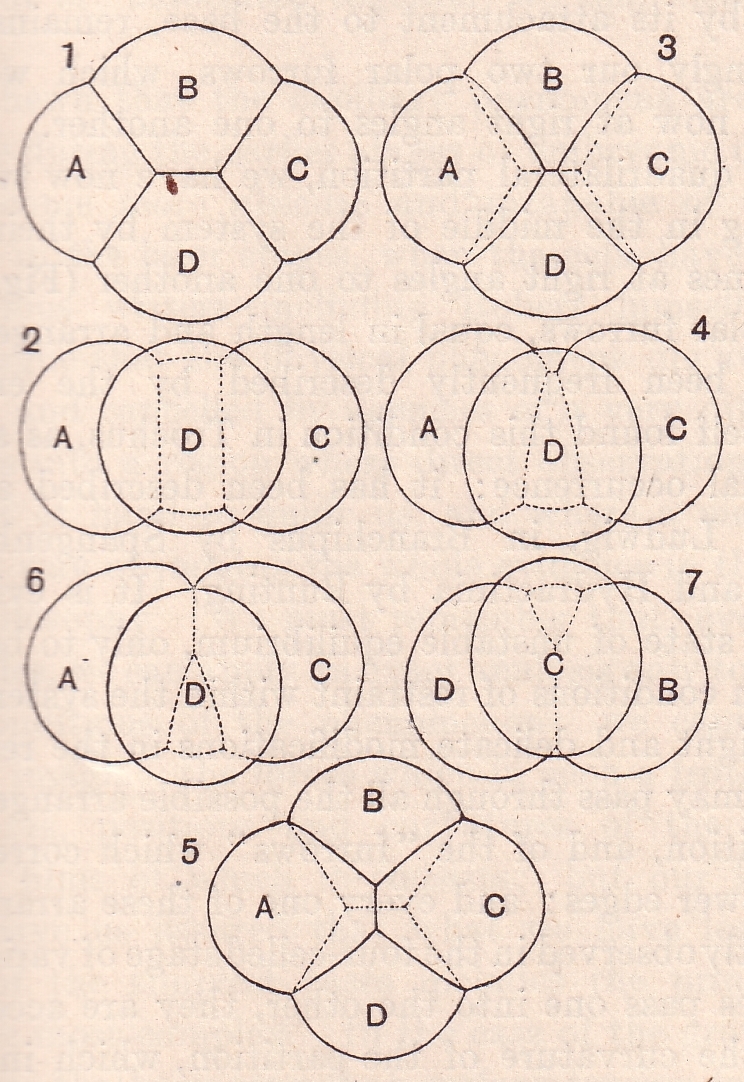 Contact surfaces between four cells, or bubbles. This has nothing to do with the soul. It does have to do with how we can often simplify cells to their “shells”, and for certain principles this approximation holds true.