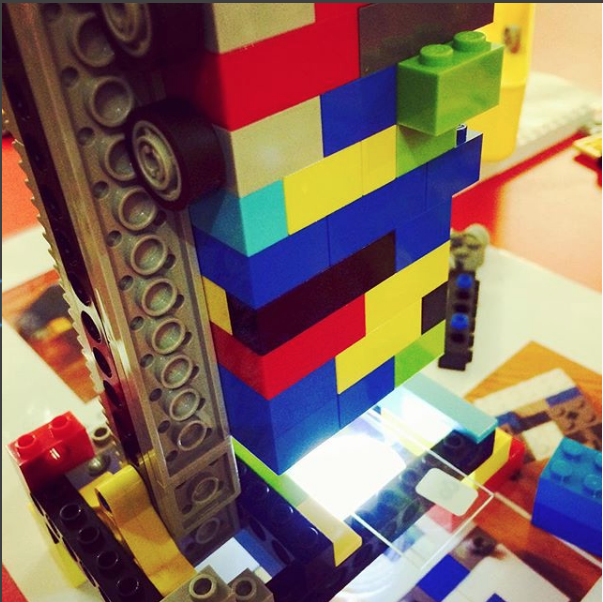 Now a scientist/engineer hybrid, I used to be one of those kids that really liked playing with LEGO. Surprisingly – or maybe not really – I have been able to incorporate LEGO into both my work and my favourite extracurricular activity (public engagement):

As it turns out, I’m not the only one who loves LEGO and science. Who knew?

Inspired by LEGO, researchers have created a modular system that can be used to build microfluidic channels. In microfluidics, the goal is to control fluids in small channels (micro-sized, usually). It has been used in the development of inkjet printers and is now an interdisciplinary field that will allow things such as high-throughput screening and lab-on-a-chip technology. The major advantage is that low volumes can be used.

While I’m not entirely convinced yet that the production of these blocks is simple, and I have doubts about the alignment of the different channels as well as sealing the interfaces between the different blocks (you don’t want everything to leak out), I always love creative solutions and especially if they are inspired by my favourite block toy! While it might not be super-useful in a research context, it can be used as a public engagement tool to show off some nanotechnology. How can we use microfluidic channels for mixing small amounts of liquid, or separating them out? What are the different types of flow, for example, laminar?

All of this and more, soon near you (perhaps).

2. Liquid-handling Lego robots and experiments for STEM education and research

Another example is a liquid handling tool that has been built using LEGO pieces. LEGO does have quite some educational kits that teach about robots, mechatronics and programming, that allow easy conversion to the development of STEM education tools when in the hands of creative minds. In this case, a pipetting robot was developed that can be used in biology, biochemistry or chemistry demonstrations or workshops.

Using this tool can allow for a very educational and interdisciplinary (+1 for the buzzword) workshop that combines engineering (building and programming the robot) and science (experiments such as performing delusions, measuring pH using a pH indicator or anything).

All of this and more, soon near you (maybe).

These were just two examples of geeky scientists and engineers proving that you are never too old to play with LEGO. Even if the box says ages 4-99.

Sources and suggested links:
The LEGO-microscope is based on http://legoscope.squarespace.com/
LEGO-microscope pictures by Rolf Black.
The two papers I have referred to and copied images from are:

LEGO education runs various different events and competitions, including the FIRST LEGO LEAGUE, that challenges teams of 9-to-14-year-olds to build and programme robots to complete specific tasks. I helped out at a tournament last year and it was awesome. And not just because my badge said: “Robot Practice Table Supervisor”.