Last week, I suddenly found myself in a situation where I had 12k followers on twitter.

Before you think I had some sudden explosion of followers – okay, that would be awesome, but who are we kidding, I’m currently followed by 179 wonderful people* of which hopefully a minimal number is a bot, – I should be clearer. For a week, I was tweeting for the rocur** @iamscicomm.

Well, let’s just say I was slightly overwhelmed. Suddenly, I had a potential readership of really a lot. I actually made it to over 30 responses and likes on some of my tweets, and yes, I am totally bragging but I was quite proud of myself!

The week started with me photoshopping the scientiacristina (in charge of curating the twitter account) beaker into my profile picture.

Then I had to come up with a plan… What should I tweet about? The goal of @iamscicomm is to talk about the interesting things involved in #scicomm and initiate discussions around communicating science. As in whatever I do (blogging, personal tweeting, etc), I just went for whatever I find interesting. My very elaborate plan (written on the back of a research paper I was reading on the train) was as following: scoping out my temporary audience (what are their reasons for being involved in #scicomm?), sneaking in some D’Arcy Thompson, talking about humour in #scicomm***, finding a niche/audience and how to combine it with a day job.

The most interesting discussions were on humour and the day-job-combo questions. I wanted to wrap up the week, exactly a week later, by briefly summarising my thoughts on these topics, that might or might not have changed after the public twitter discussion. 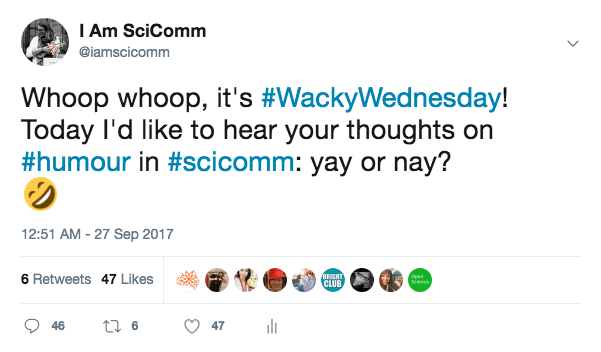 Pretty much everybody went with “Yay,” with a few people who had some nuances.

So in my opinion (and somewhat backed up by the #scicomm community), the reasons to add some humour to science communication is that it helps grabs people’s attention, makes the scientist more relatable and more memorable, and it helps dispel the idea that “science is boring” (even though, let’s be honest, sometimes it is).

On the other hand, some people might be of opinion that science is a serious matter, and adding some humour might be a distraction. It can lead to misinformation if the message is oversimplified or changed too much. It can increase the problem of elitism if too many inside jokes are used. Finally, it can make the speaker seem unprofessional.

Anyway, the end conclusion seemed to be that you should not try to be funny just for the sake of being funny. Or to show off. If you would like to add some jokes, make sure they are appropriate for the situation and audience. And the speaker, for that matter. If you’re unfunny, better not start making jokes. It will not end well.

Topic #2: combining #scicomm with a research job, how do people do it and do they get acknowledged for it?

Basically, I was wondering about recognition of doing things like science communication and public engagement. It’s quite common for people, especially people early in their career, to do most of this in their “own” time, as an aside to their – already probably quite demanding – research job. Practically everybody I’ve asked about this in person has said the same: lab first, #scicomm on the side. There are many stories about people either dropping #scicomm because they had no time, or leaving research to focus on #scicomm permanently.

But, in my opinion, #scicomm is not some kind of weird hobby! It is an integral part of science and research. I don’t think everybody should be going out to schools or participating in demonstrations on open days, but I don’t think you should be punished for doing so either.

There are many reasons for doing #scicomm. For one, most researchers are publicly funded so it is only correct for them to communicate their research to those that are paying for it. Indeed, for some funding agencies, science communication and public engagement are becoming a requirement. It is also a way to ensure that people that have to make important policy decisions have the best information available. It could be because you want to inspire the next generation of scientists.

In my opinion, it can hardly be a bad thing. It raises the profile of everyone and everything involved: your university, your research topic, science in general, and yourself. So for the people that enjoy spending some of their time on communicating science and engaging people, I feel that it should be properly recognised.

There are some ways this is happening. Both my school as my university have a prize for public engagement *****, which acknowledges peoples efforts and comes with some prize money to fund future endeavours. But this is after the time has been put in. Can there be a way to recognise that it’s not time lost?

After bringing this up in the twittersphere, the solutions are simple: we either need longer days, a time turner, the ability to clone ourselves or to build robot helpers to do some of the work. All very realistic solutions, obviously.

* Oooh, it’s 186 now!
** Rotation Curation, also #RotationCuration or #rocur because hashtags are #thabomb, is the concept of rotating the spokesperson on a broad-scoped social media account.
*** Yes, I am #hashtagging every #scicomm mention. Deal with it.
**** Felt like fitting a more original (read: hipster) use of the hash in there…
***** which is how I got my name mentioned by Stephen Fry and this was such a life-determining event that I take absolutely every chance I can to bring it up again.