Skip to content
So that was “this week in science.” I’ll leave y’all with a related joke: 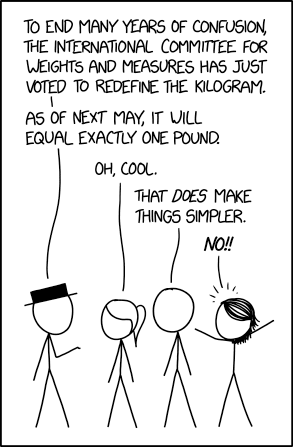 The international system of units: en.wikipedia.org/wiki/International_System_of_Units
The new kilogram was in the news: www.nytimes.com/2018/11/16/science/kilogram-physics-measurement.html and www.theregister.co.uk/2018/11/17/amp_kelvin_kilogram/
Comic from xkcd.com