We live in exciting times. Technology that novelists and script writers could only dream of, now exists without us being amazed about it every single day. We have computers, that make immensely complicated calculations and simulations for us all the time. We send people into space and leave them there for months. We can talk to someone on the other side of the world with a simple click on a green phone logo, we can even see them if we want. We use the touch of our finger on a screen to control our devices. We ask our phone questions and it talk backs to give us the answers. We are able to step into virtual reality without getting nauseous. We send out cars that can drive themselves to map our streets. We are able to manipulate single genes, single molecules, single atoms.
Seriously, how are we not amazed every single day?
With all that has been achieved up to now, I can’t help but wonder: “What’s next?” Which crazy science fiction technology will we turn into reality tomorrow? Will humans soon be inhabiting another planet? Will some one create a working lightsaber?
Will we ever be able to travel through time?
I’ve dreamed about this. Not literally –  though maybe I have, I just never remember my dreams so there’s no way to tell – but conceptually. I love reading about it. I love watching movies about it. I love having discussions about the paradoxes it could create. But in the same way that I know the dinosaurs in Jurassic park aren’t realistic, I know it cannot and probably never will be real.
See how I said probably? Did you notice that spark of hope?
To start with, there’s the way my friend (oh wow, his last post is also about SciFi!) states that he’s travelling through time and space at a constant forwards speed, as we all are. So in that sense, we’re all travelling through time, slowly. More interestingly, by travelling through space at a high speed, one would be passing through time at a different speed than others, because the space traveller would have aged less than anyone who had stayed on earth. This idea is called the twin paradox (recently used to explain how Luke ends up being younger than Leia, even though they’re twins) and is due to time dilation, an aspect of special relativity where time slows down when moving at near light-speed speeds. (If you ever have the chance to ask Lieven Scheire to explain special relativity to you, don’t miss it, it’s genius.) So we are able to travel through time at different speeds, and essentially travelling little bits into the future, and renders me hopeful that more sophisticated time travel could be possible.
How would this work? It’s amazing to think that when we look into space, we’re actually looking back in time. Could it ever be possible to travel back in time as well? (I would think that if we’d like send people to travel through space beyond our solar system, travelling through time could be a prerequisite, that is if we want to actually have the same people coming back to tell us what they’ve seen.) Extrapolating from time dilation, we could imagine that travelling at a speed faster than light would allow time reversal. Unfortunately, we don’t even have the technology to travel as speeds close to the speed of light. And that’s not even mentioning that “faster than the speed of light” is not really a thing. (For now? <– See that spark of hope again?)
Another option would be travelling through wormholes, which is a connection between two different points in space time. Unfortunately, we’re not really sure those things exist, so that’s not really a possibility either.
Or perhaps we could build an infinite improbability drive, or a ship that moves time and space around us while remaining stationary. Or have a space ship that’s actually a living creature that propels us through the wibbly wobbly timey wimey thing. Or, I don’t know, a time travelling car?
But if it was up to me, I would tackle time travel differently. I would use a bath tub to travel through time, and incidentally space. (And a friend and myself came up with this idea before that movie about the hot tub time machine came out!) 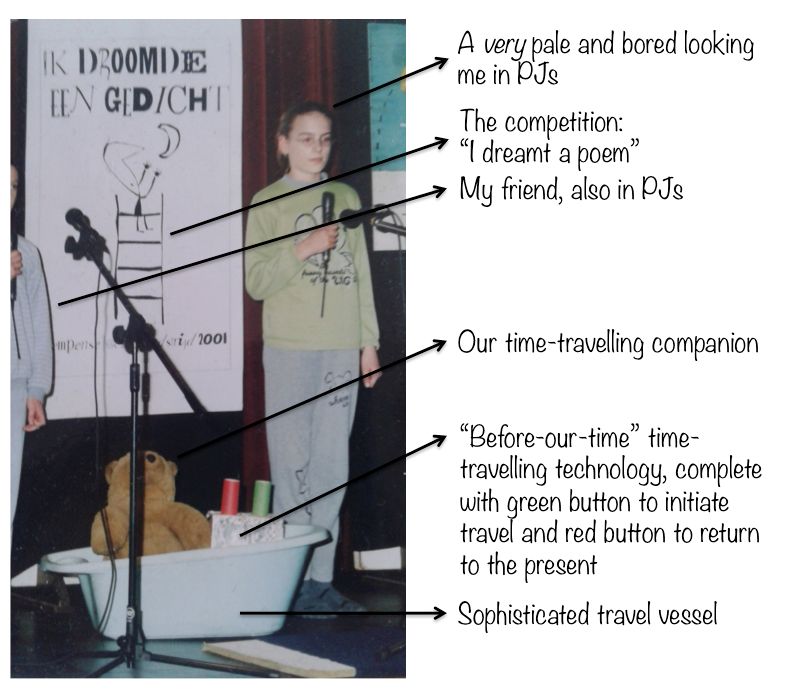 One thought on “More than Sci-Fi”